Blog
Home / Blog / Employee Benefits / How will the 2016 election impact the ACA?
Save as PDF

We are nearing the conclusion of one of the most dramatic and unpredictable election cycles in history. The odds have continued to shift on a daily, sometimes hourly basis. Many companies and individuals are wondering how the Affordable Care Act, also known as the ACA, will be impacted based on the election. Let’s take a look at where things stand, the possible outcomes of the election and some potential impacts to the ACA.

Starting at the top of the ticket, as of Monday, November 7, Hillary Clinton has a 68.3% chance of winning the presidency, according to FiveThirtyEight. That means there is currently a 31.6% chance of a Trump presidency. As previously mentioned, these odds are continually shifting and Clinton’s lead has narrowed significantly, even in the last few days.

In regards to the Affordable Care Act, Clinton and Trump have most differing views and objectives. Secretary Clinton has stated that she wants to protect and enhance the ACA, while Trump has called for its repeal. One item on which they seem to agree is that they would both like to allow Medicare to negotiate drug prices on Medicare Part D. The challenge is that there is currently a law that specifically prohibits this practice, so they would both need Congress to cooperate in changing that regulation.

The table below highlights the major differences between Clinton and Trump regarding the Affordable Care Act. They both have goals (Clinton – public option; Trump – full repeal of ACA) that would require a filibuster-proof majority in the Senate, which doesn’t appear to be possible for either side of the aisle at this time.

With the Republicans expected to hold a majority in the House of Representatives, there are really 4 potential outcomes to the election. The chart below shows these possible outcomes and the association potential impact to the ACA: 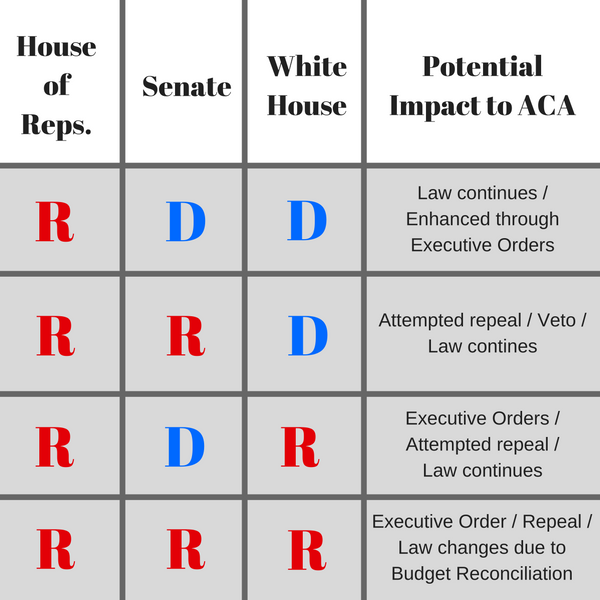 There are really only two scenarios where we would see changes to the current ACA landscape. If Clinton wins the presidency and the Democrats win a majority in the Senate, which is possible as explained above, we would likely see enhancements and expansions of the current ACA provisions.

The other scenario in which we would see changes would be if the Republicans maintained control of Congress and Trump won the presidency. If this were to happen, Republicans would likely take advantage of a process called Budget Reconciliation to repeal parts of the law. In this process, changes are attached to a budget, which means that they could only impact the parts of the ACA where there are fiscal aspects (the employer/individual mandates). In this scenario, they would not be able repeal parts of the law that are not related to finances (pre-existing conditions provisions, requirement to cover preventative care/birth control, etc.). As mentioned previously, a full repeal would require Republicans to have a filibuster-proof majority.

Based on current polls, it is expected that as of January 2017 the Democrats will control the White House and Republicans will maintain control of the House of Representatives.  The Senate race is very tight at this time and control of the chamber could likely come down to one seat.  Whichever side of the aisle controls the Senate, if election results are consistent with current polling data, we can expect the ACA to stay around in a form very similar to what it is currently for years to come.